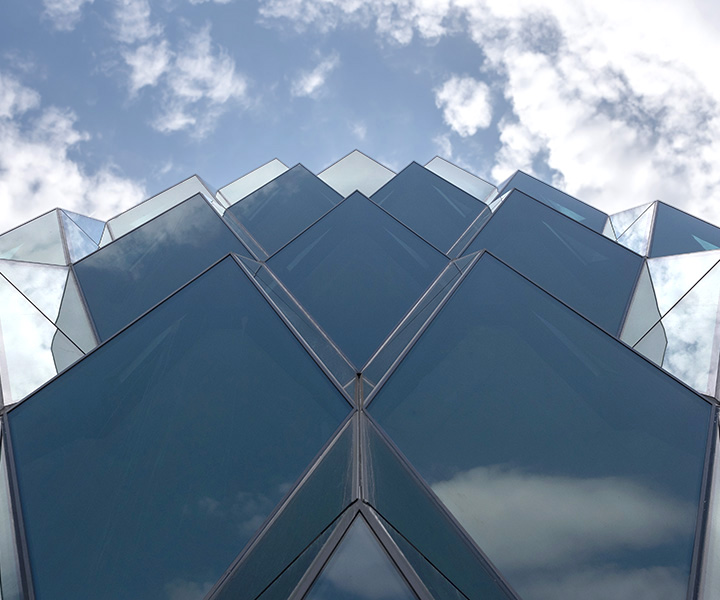 The carves are composed of five pane tridimensional curtain wall units. Each unit has a base of 8’x8’ for a typical height of 16’ with four triangular panes surrounding a rhomboidal central pane. This system enables the signature “solar carving” at the North-West and South-East corners of the building elevations, creating an extremely original and iconic aesthetic effect.

Terraces located at the top of the building, adjacent to the High Line and inside the carved corners, an aluminium railing system with 8.8 Ionoplast laminated glass was designed in continuity with the building in order to achieve the maximum transparency from the rooftop level that faces west towards the Hudson River. The Double Glazed Units consist of both interior and exterior laminated panes, with Interpane Ipasol neutral 38/23 coating. 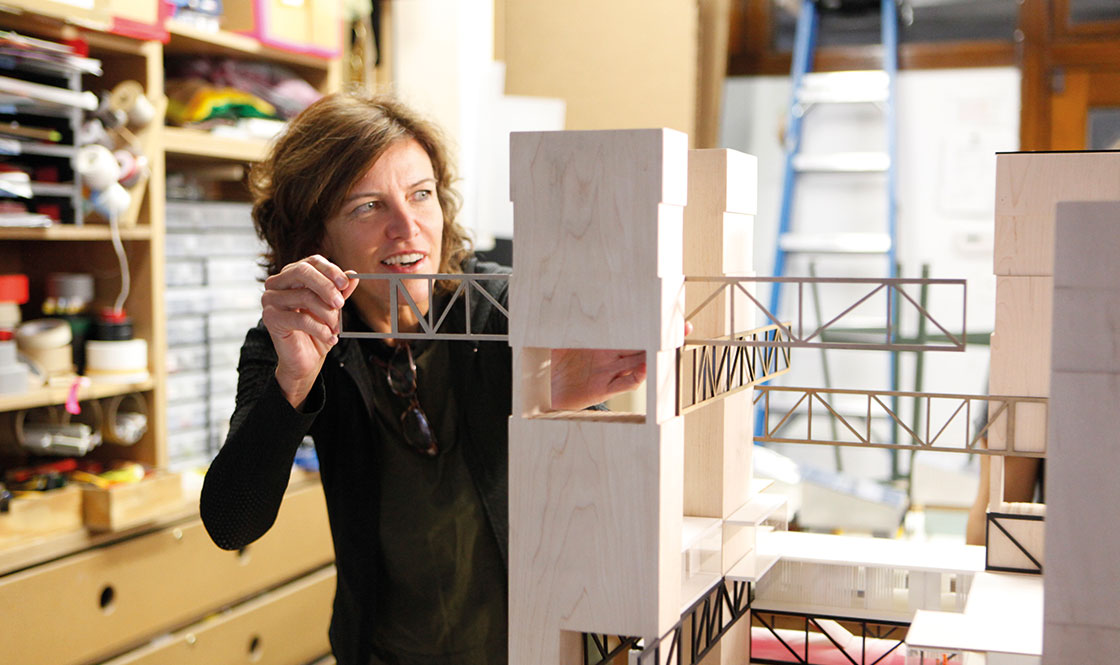 Jeanne Gang is the founding principal of Studio Gang. She is member of the American Academy of Arts and Sciences and a Chevalier de l’Ordre national de la Légion d’honneur. Her work is internationally renowned for a design process that foregrounds the relationships between individuals, communities, and environments.

The portfolio of projects spans scales and typologies, expanding beyond architecture’s conventional boundaries to pursuits ranging from the development of stronger materials to fostering stronger communities. She uses innovative responses to issues of environmental and ecological sustainability, employing sustainable-design techniques—such as the use of recycled materials—to conserve resources, decrease urban sprawl, and increase biodiversity.

She is best known for her Aqua Tower, an 82-story mixed-use skyscraper in downtown Chicago that, when completed in 2010, was one of the tallest buildings in the world designed by a woman. In 2013 Studio Gang Architects received the Architecture Design Award—awarded to an individual or a firm for “exceptional exemplary work in public, commercial, or residential architectural design”—from Cooper-Hewitt, National Design Museum. She is currently designing major projects throughout the Americas and Europe, including the Gilder Center for Science, Education, and Innovation at the American Museum of Natural History in New York; a unified campus for the California College of the Arts in San Francisco; and the new United States Embassy in Brasilia, Brazil. Jeanne Gang has been selected as the recipient of the 2017 Louis Kahn Memorial Award, an annual prize established by the Philadelphia Center for Architecture and Design in 1983 to recognize “an individual who has made significant contributions to the field of architecture,” while honoring one of the city’s most influential architects. 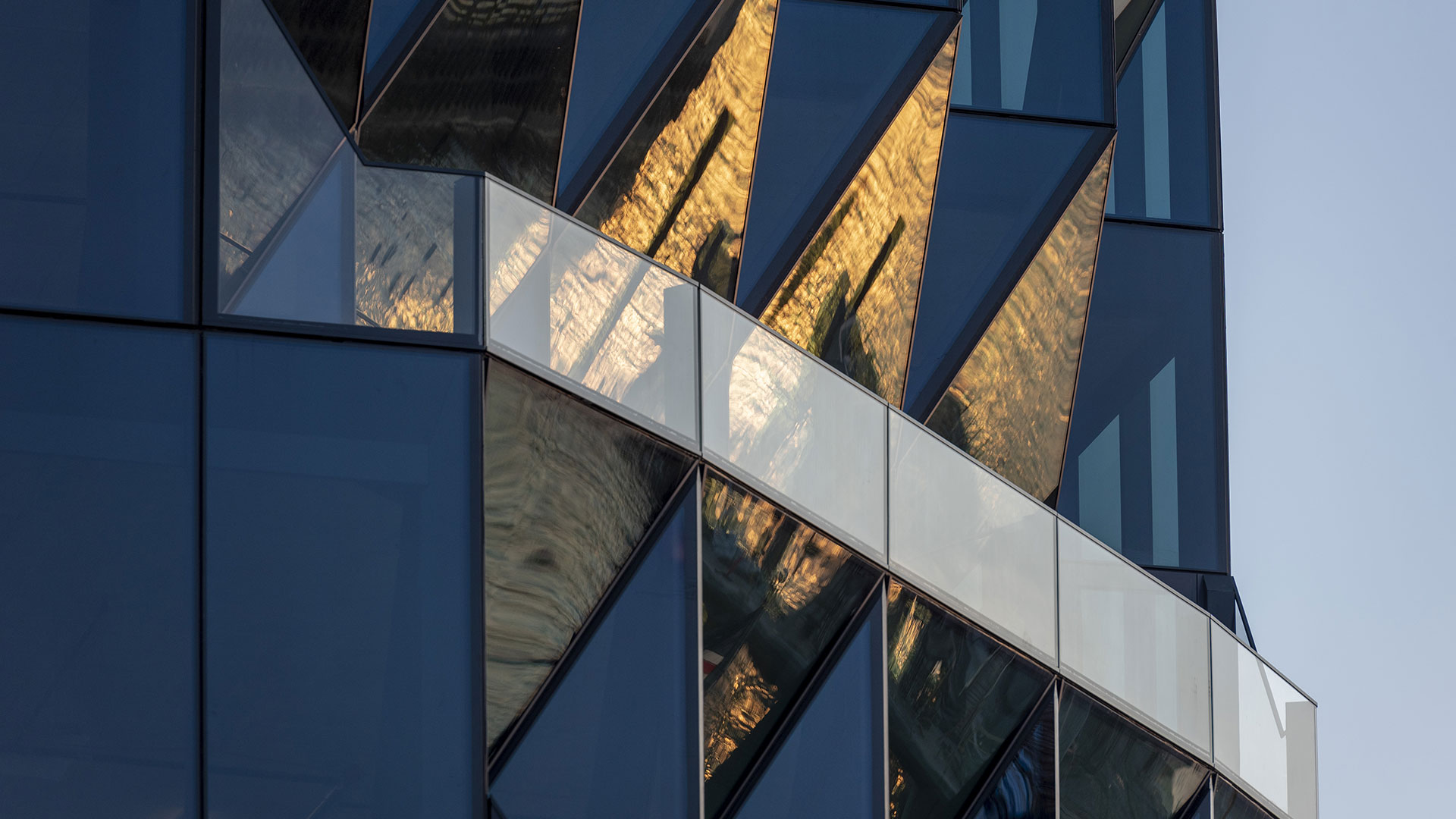 Sculpted by the angles of the sun, Solar Carve tower explores how shaping architecture in response to solar access, with positive impact on the environment. 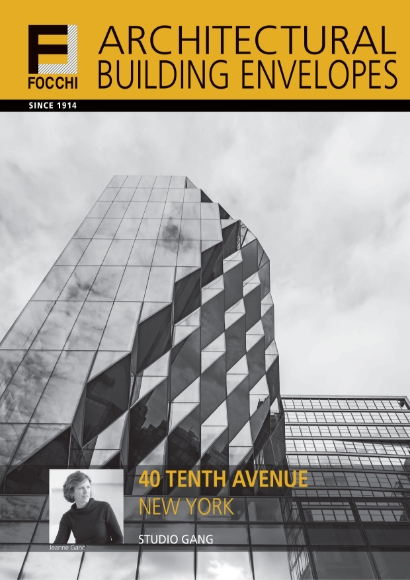 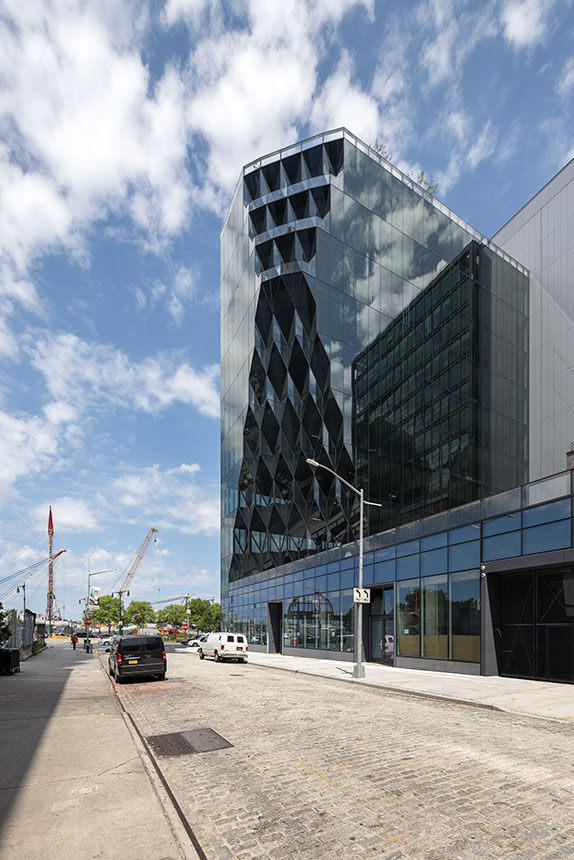 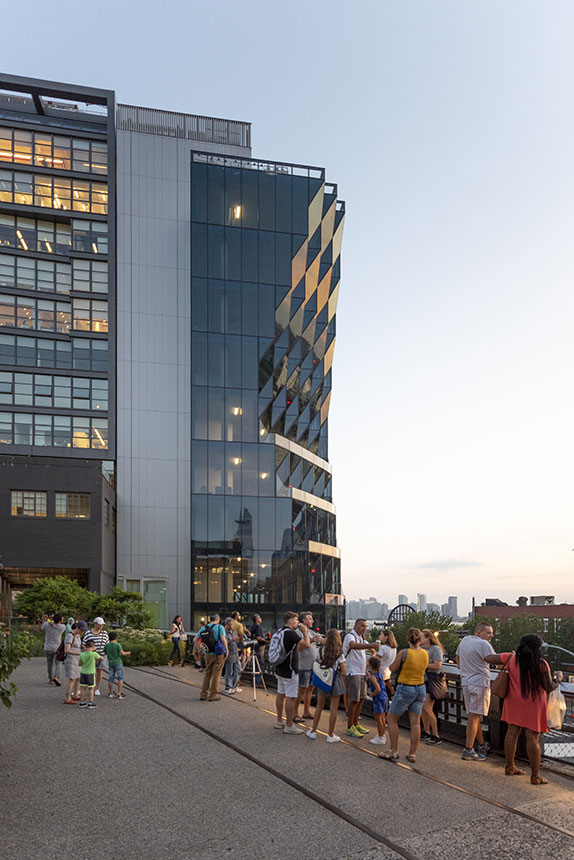 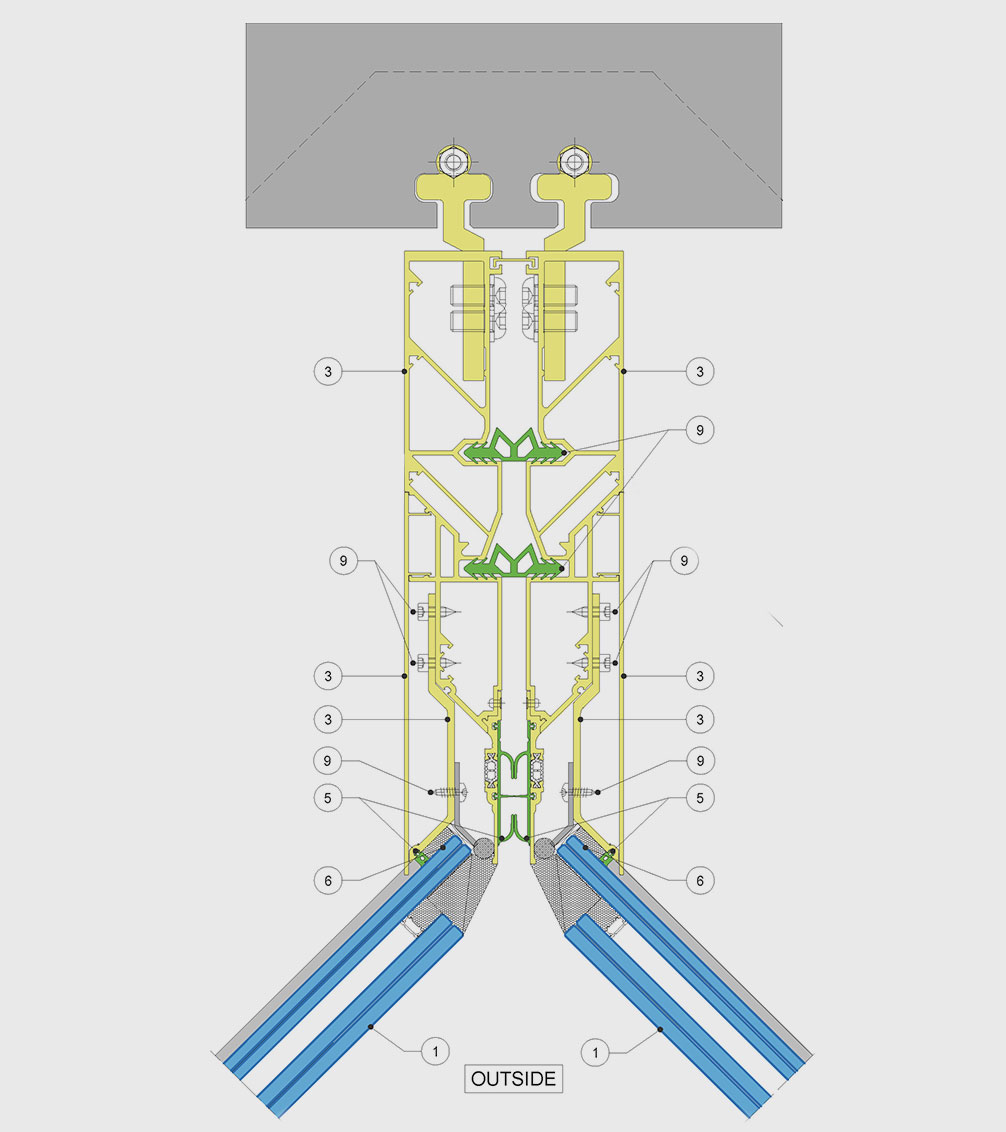 The glazing system has been geometrically optimized into a pattern of three-dimensional facets that articulate the carved sections of the tower. The curtain wall unit is composed of a central diamond-shaped panel tilting downward, surrounded by four triangular pieces that are perpendicular to the slab to achieve standard stack joints. The carved curtain wall not only blocks sun glare and heat gain but also creates dynamic corner workspaces. The facade features high-performance glass with low reflectivity. 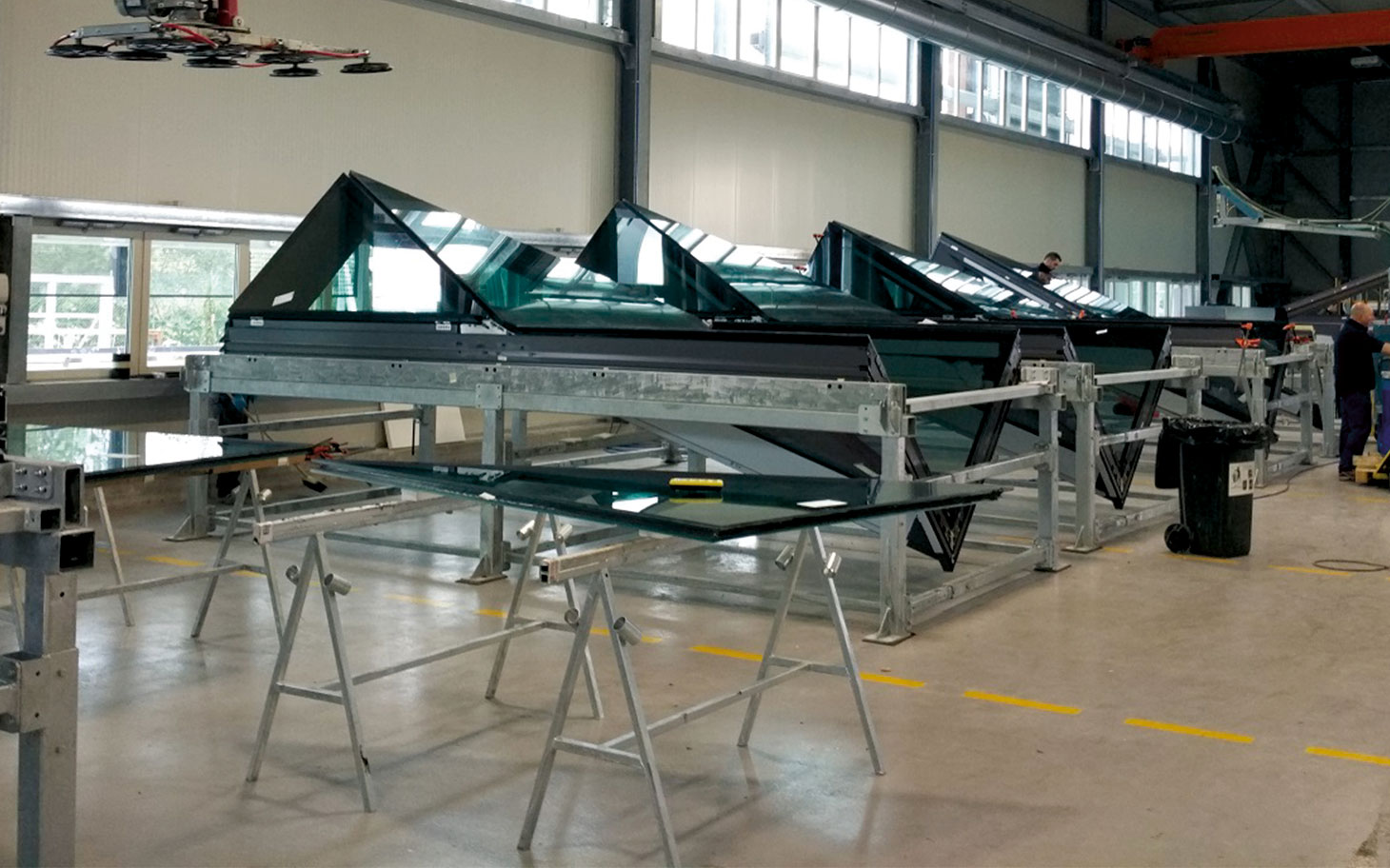 Located at the edge of Manhattan between the High Line park and the Hudson River, the building takes its unique form from the geometric relationships between the allowable envelope and the sun’s path.

Sculpted by the angles of the sun, Solar Carve (40 Tenth Ave) explores how shaping architecture in response to solar access and other site-specific criteria can expand its potential to have a positive impact on its environment.

In addition to producing a faceted, gem-like facade, this integrated response allows the building to benefit the important public green space of the High Line -privileging light, fresh air, and river views to the public park- while also becoming a new iconic silhouette on the New York skyline. 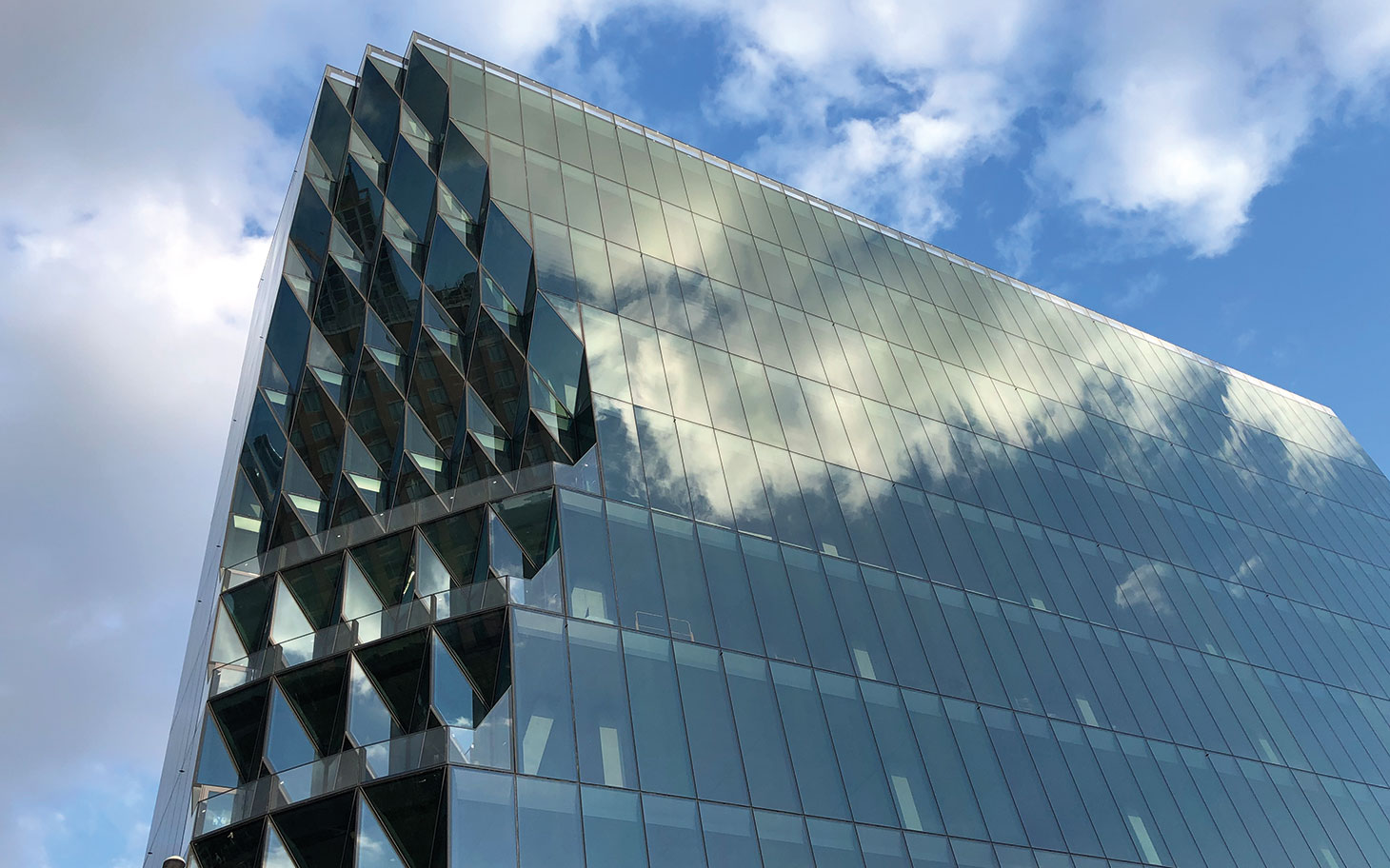 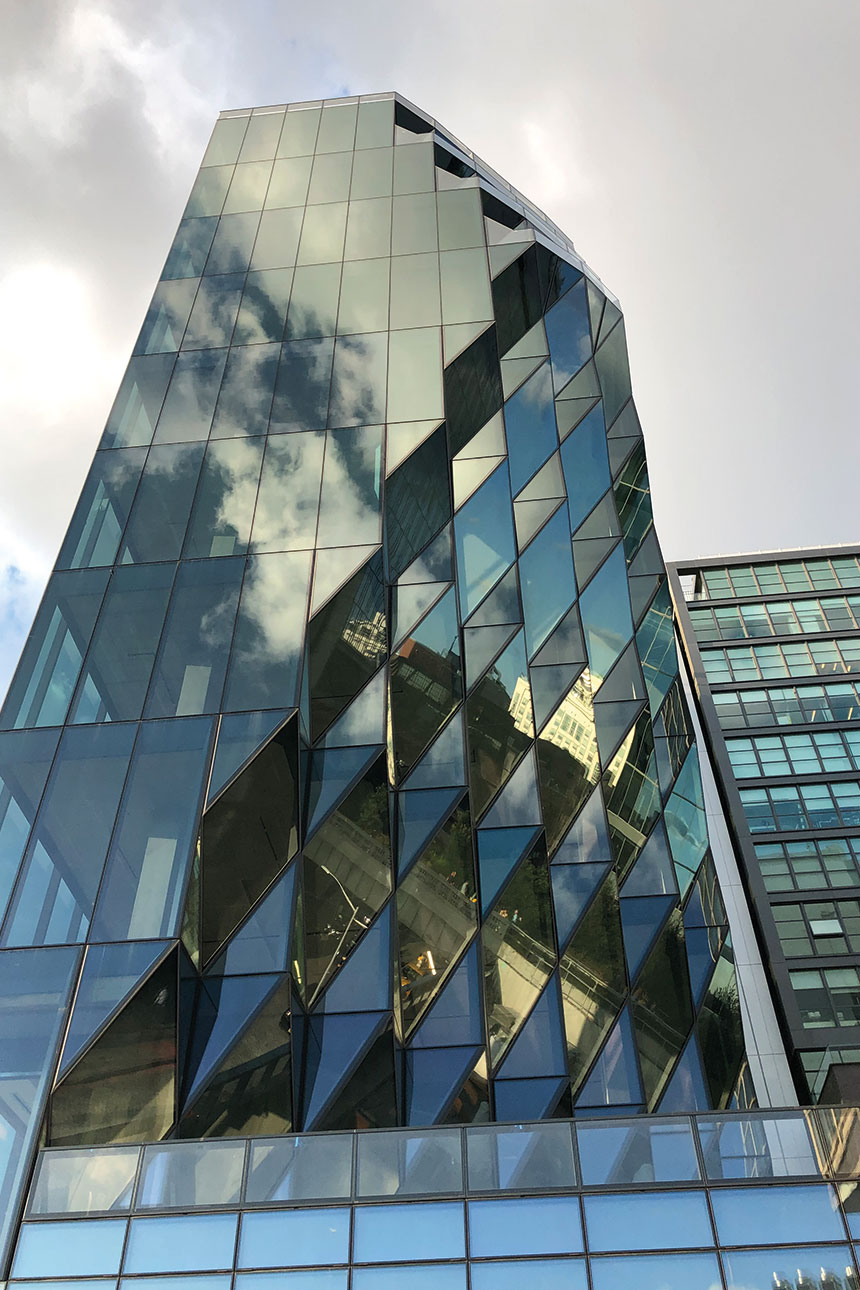 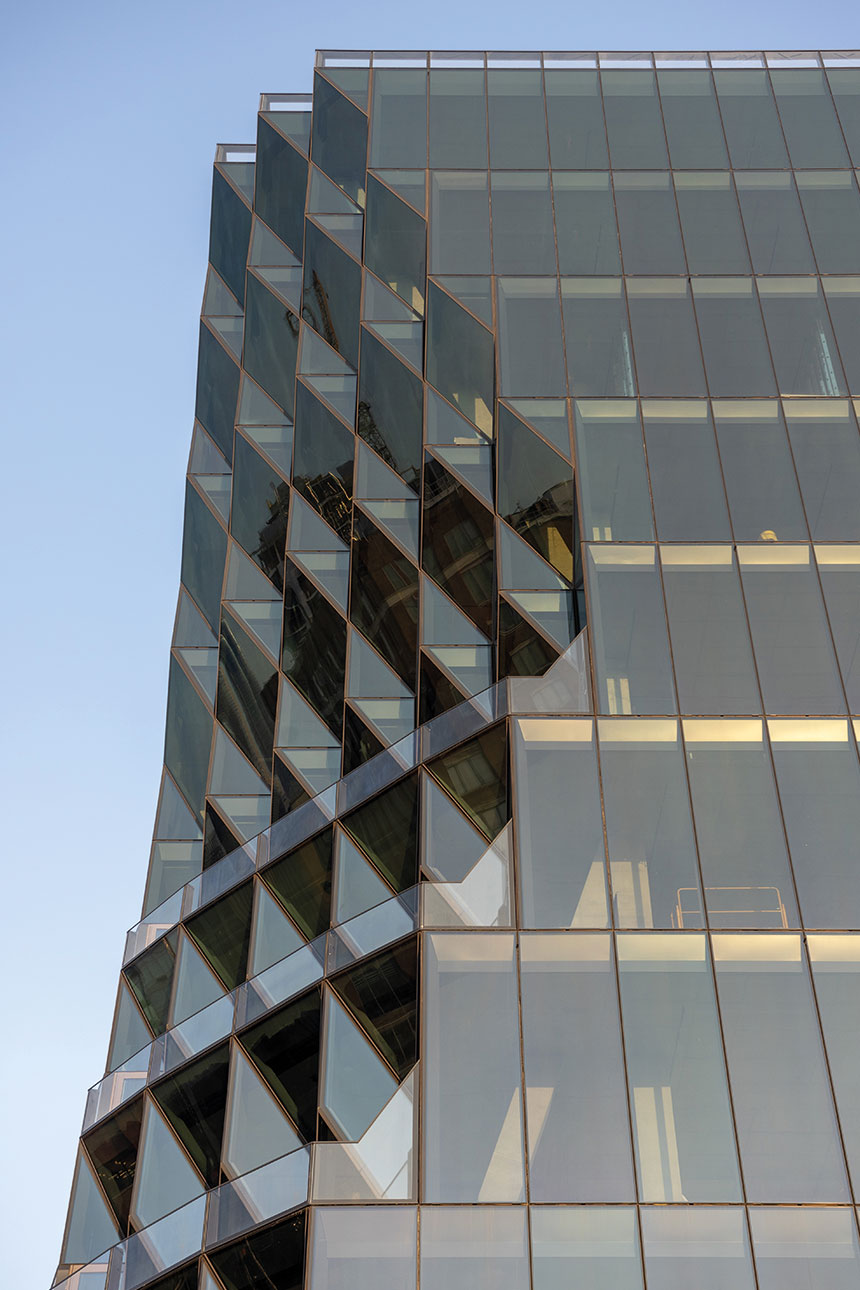 EWT-1 and EWT-2: standard curtain wall units dimension of approx. 5’ (about 1520mm) wide by 16’ (about 4870mm) high for the enclosure of East and West elevations.
The Double Glazed Units (DGU) consist of a heat-strengthened pane on the outside and a tempered monolithic pane on the inside. The DGU Low-E coating is Interpane Ipasol neutral 38/23 for the EWT-2 of typical floors (2nd to 10th) and Interpane Ipasol neutral 70/37 for the EWT-1 retail curtain wall at the ground level on Tenth Avenue. Aluminium profiles are powder coated in a custom dark grey color, compliant with AAMA 2604 for interior profiles and with AAMA 2605 for the exteriors. 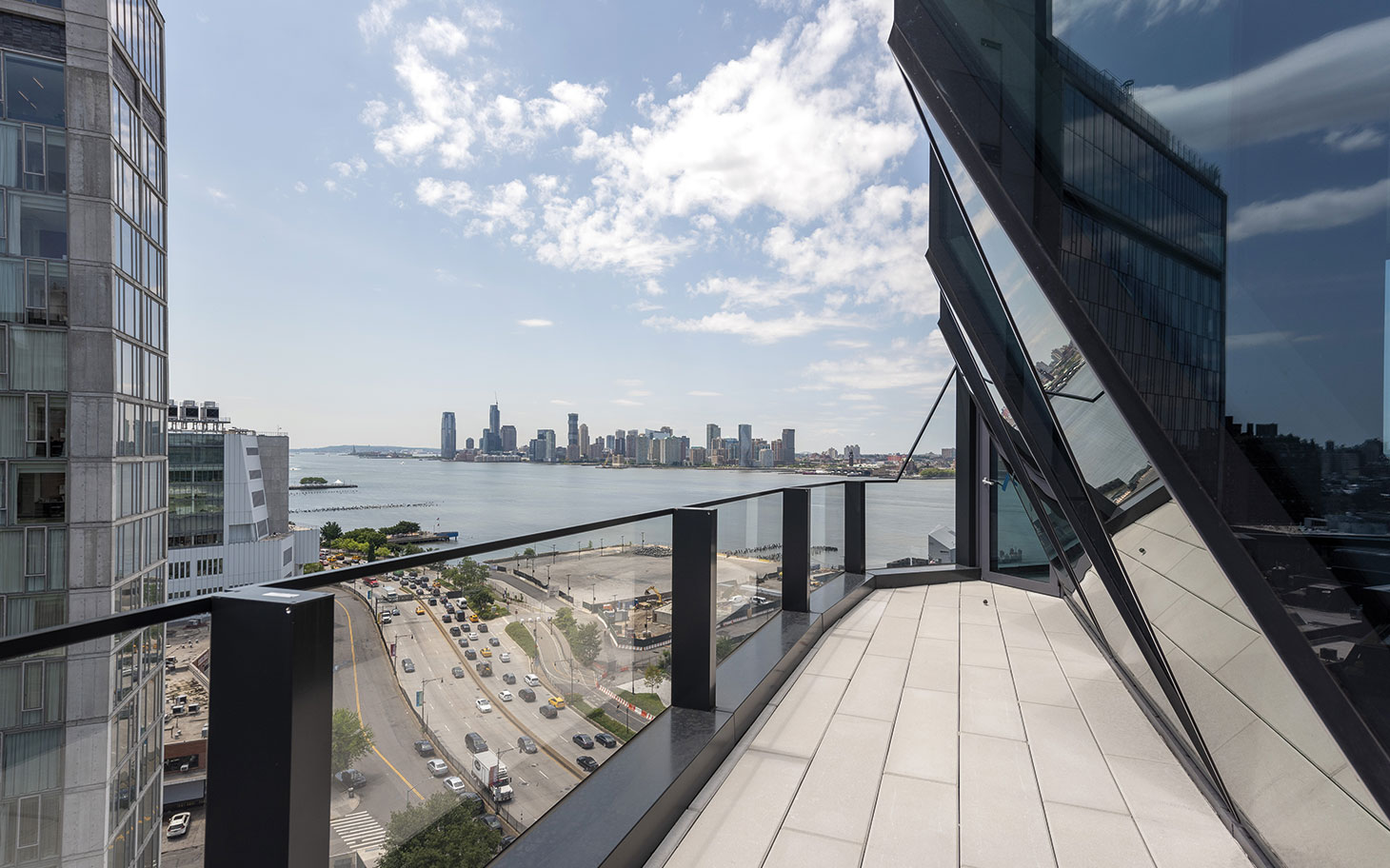 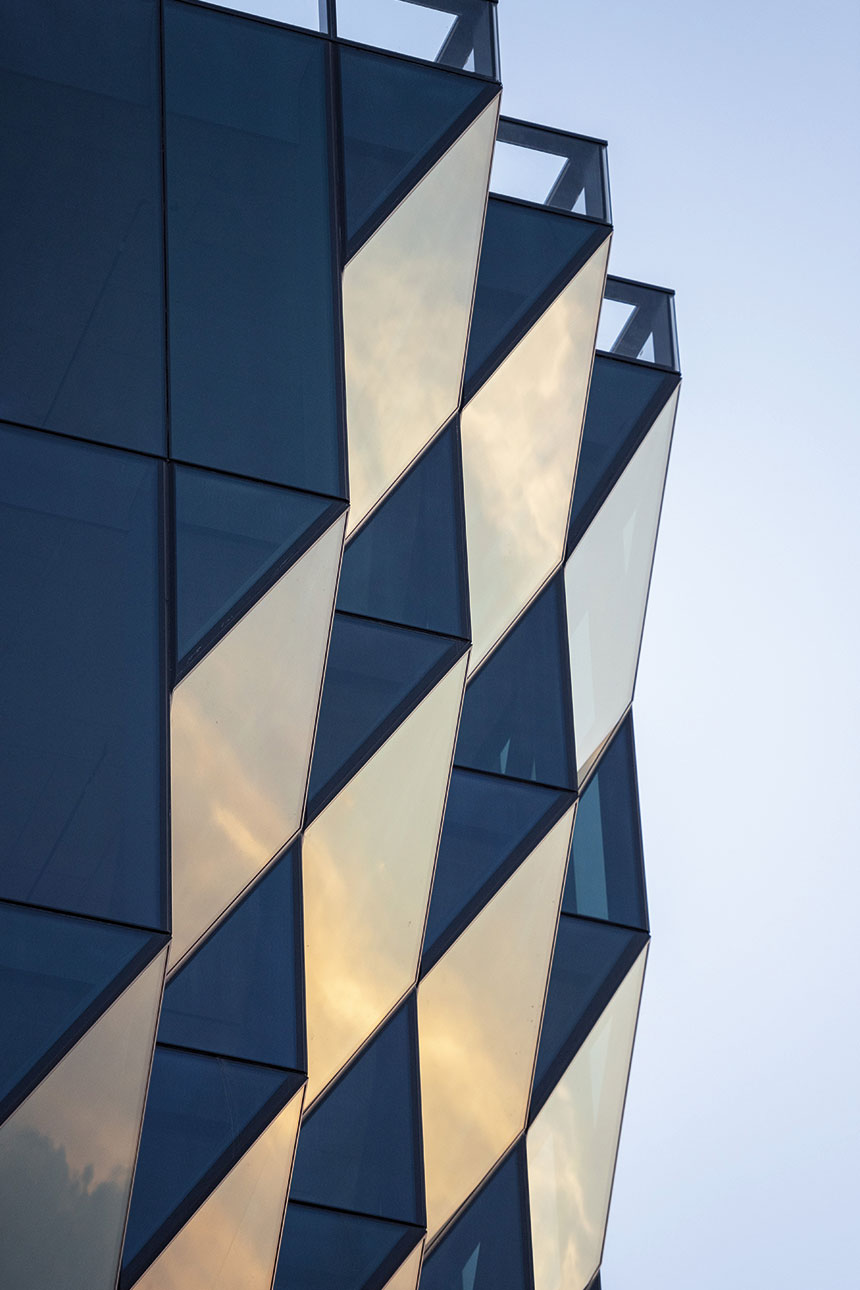 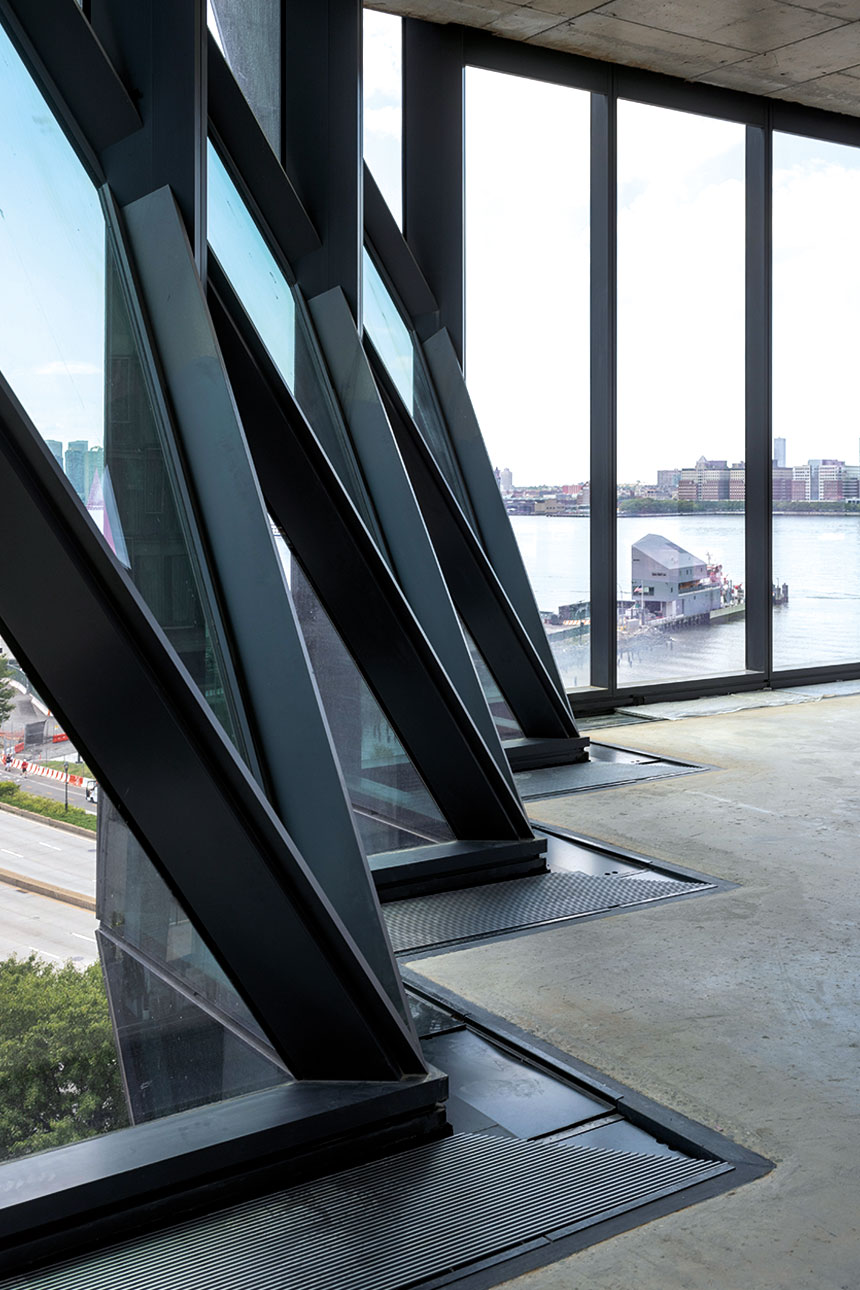 Aluminium profiles are custom color dark grey powder painted, compliant with AAMA 2604 for interior profiles and with AAMA 2605 for the exteriors ones.
The building envelope has been completely 3D designed in a close synergy with Studio Gang. 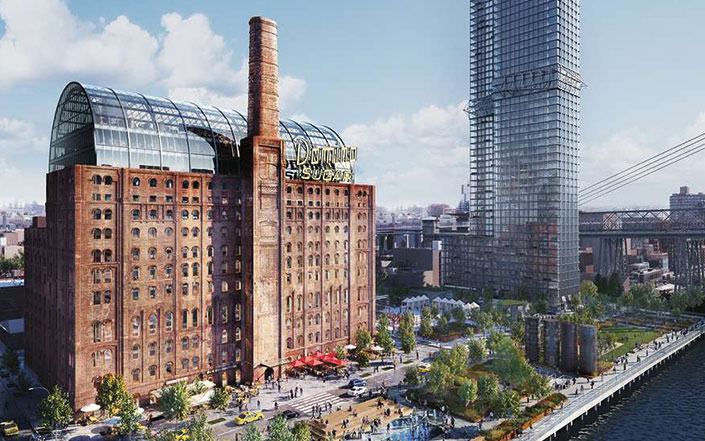